DARPA’s VTOL X-Plane project has taken off as Sikorsky Aircraft Company and Aurora Flight Sciences have both won contracts for Phase I of the US Defense Advanced Research Projects Agency’s (DARPA) [www.darpa.mil] experimental VTOL program .  The four year, $130 million project goal is to develop an experimental aircraft that flies faster than 300kts, has a cruise lift to drag ratio of 10 or better, a hover efficiency of 75 percent or better, and carry a useful load of at least 40 percent of the vehicle’s projected gross weight of 10,000-12,000 pounds

DARPA’s VTOL experimental plane, or VTOL X-Plane, program seeks to overcome these challenges through innovative cross-pollination between the fixed-wing and rotary-wing worlds, with the goal of fostering radical improvements in VTOL flight. Rather than tweaking past designs and technologies, VTOL X-Plane challenges industry and innovative engineers to create a single hybrid aircraft that would concurrently push the envelope in four areas:

There will be three phases of the experimental VTOL X-Plane project lasting 52 months between October 2013 and February 2018.  The first demonstrated flight is scheduled 42 months after the initial award.

DARPA’s mission is to maintain the technological superiority of the U.S. military and prevent technological surprise from harming our national security by sponsoring revolutionary, high-payoff research bridging the gap between fundamental discoveries and their military use.

Over the years, DARPA has worked to enhance our national security by funding research and technology development that not only have improved our military capabilities but have changed the way we live. Since the very beginning, DARPA has been the place for people with innovative ideas that lead to groundbreaking discoveries.  Source: DARPA website 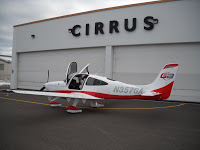 Flight training in a Cirrus at Guidance Aviation of Prescott, Arizona