Denver, CO. – She has flown in Cessnas, Pipers, Beechcrafts, and even Robinson Helicopters with her father while attending airshows to collect aircraft pins for her flight bag. Along the way, she met Captain Judy Rice of ThinkGlobalFlight.org – A flight around the world to promote the importance of S.T.E.M. education (Science, Technology, Engineering, Mathematics) and the promises that aviation and aerospace hold for youth.

The 7th grader and Think Global Flight Ambassador to Denver, Co., “Ali”, received an invite from Captain Judy Rice to meet an important supporter of the global flight to promote S.T.E.M.. As she walked into the door of his home and viewed photos of lunar landscapes, space suits, NASA medals, and F86 Sabre squadrons, Ali knew she was meeting a man not of this world – The one and only Dr. Buzz Aldrin, Astronaut, Fighter Pilot, Congressional Gold Medal Recipient, and U.S. Military Veteran.

“Dr. Aldrin shared with me photo albums only a few have seen; they were amazing. We spoke about how science, technology, engineering, mathematics, and even the arts play a huge role in aviation and aerospace. He shared with me his support of Captain Judy’s effort, Think Global Flight, and how the flight around the world will help kids to see a connection between their interests in aerospace and aviation with the topics they study in classes like math and science. He even shared with me another one of his projects that help U.S. Military Veterans become pilots,” stated the Campus Middle School 7th Grader.

Buzz shares his support, “Back when I was privileged to be a part of the Apollo program, the USA was #1 in science and technology fields. No one had ever heard of S.T.E.M. (Science, Technology, Engineering, and Mathematics) because we were at the top. Unfortunately today, America is falling behind other countries. S.T.E.M. is exactly the focus of Think Global Flight (TGF) reaching over 20,000 students and why I strongly support Captain Judy and TGF. I am looking forward to joining the official launch on April 3 from the SUN ‘n FUN airshow in Lakeland, Florida. In addition, I will celebrate a repeat of my T6 solo flight in 1941 at Gilbert field in the TGF Cirrus aircraft with Captain Judy.”

Think Global Flight is setting up Student Command Centers around the globe, signing up teachers and their students. Within these Student Command Centers, students take part in curricula designed to make a connection between their school work and their interests in aviation and aerospace. Students can take part in subject matter ranging from flight planning and meteorology to international relations and green technology. While the around the world flight is taking place, students can connect with the flight, track its progress, and communicate with the flight crew via the Internet. Currently, there are 20,000 participants in 25 countries and 31 U.S. States.

“Fly Me To The Moon”

The Think Global Flight crew is scheduled to take off April of this year. Their current objectives are to finalize the flight plans and raise the remaining amount of funds needed to fly around the world and stop at schools to promote aviation and education. After the flight, Captain Judy Rice plans to continue the effort with a foundation to promote aviation and education.

If you ask Ali what her objectives are as the Think Global Flight Ambassador to Denver she’ll say, “Fly Me to the Moon! My dad is always singing that and I’m sure Dr. Aldrin (Buzz) would appreciate it! I hope the Denver School District signs on!”

*For more info on Think Global Flight, visit the mission website at: www.thinkglobalflight.org 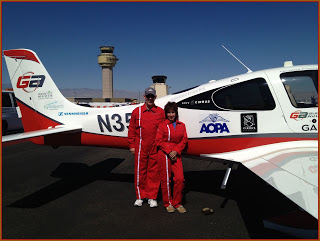