Ruben is attending the Yavapai College Associate of Applied Arts (AAS) degree program, Professional Pilot-Helicopters, with Guidance Aviation as the sole provider of helicopter flight training.
Here’s our interview with Ruben:
1)What branch of the military did you serve?
“United States Army”.

2) How many years did you serve?
“I served nine years and 1 month”.

3) What was your role in the Army?
“I Enlisted as a 68D (Aircraft Powertrain Repairer) but while I was in it went to a 15 series which was combat related so it ended up being an M.O.S of 15D. I was trained to work and do maintenance on all of the Army helicopters. Later on, I tried out for Special forces Assessment and Selection and I got selected.  It was an awesome day and a day I’ll never forget”.

4) Where were you based?
“I started out doing my basic training at Fort Knox, Ky which to me was the second hardest basic training at the time.  I then went to FortBenning, GA., for airborne school. (Where I broke my ankle on one of my jumps).
Then, I was assigned to my first duty station which was Germany with the 1st Infantry division in Ansbach, Germany.
Then I deployed to Operation Iraqi Freedom I where I was deployed to Turkey for the initial Push of the war.

Later, we regrouped and were part of Operation Iraqi Freedom II where I was sent to Kuwait and convoyed up to CampSpeicher.  After Camp Speicher, I was with the 10th Mountain Division at Fort Drum, N.Y.,  From Fort Drum, I deployed to Afghanistan and was stationed at Kandahar Airbase and from Kandahar I went to fort BraggN.C.,  to train with SpecialWarfareCenter and School and finally I went to South Korea where I was stationed with 2nd Infantry Division at CampHumphrey”.

5) What made you decide that you wanted to become a professional helicopter pilot?
“It was always my passion and dream. I like the feeling of being free and flying like an eagle. It’s just magical!  I’ve always had an excitement and drive for flight. It’s always amazed and astonished me that flight was just a dream, and most believed that it could never happen. Now, we take it for granted. I started out flying and training for fixed wing, but then I got the opportunity to fly the Apache AH-64 attack helicopter in South Korea for a forty five minute fun flight in the military and I just knew I had to fly Helicopters!  I don’t think most people can say their first helicopter flight was in an attack helicopter (smiles).  I just knew it was special.

Plus, having the opportunity to fly is extraordinary, I can’t really explain it except for it’s like, being a football player during the Superbowl and you are the underdog and you win!  It’s that exciting every time I fly.  I think only those that fly understand this feeling”.
6) How did you find Guidance Helicopters and Why did you choose Guidance?
“I was due to come home from being in the service and I knew I wanted a career in flying. I was doing my research online for about six months, when I came across the best flight school and video from Guidance and how Guidance Aviation is a Part 141 high altitude flight training school.  After watching their video and making a phone call, I was hooked! All I could think was, “Done Son!”, I’m going to Guidance Aviation”.

I decided on Guidance Aviation because they are the only ones in the nation that I knew let you start flight school from the very beginning of your private pilots license, and,  it’s “High Altitude training”!  The location was great for me and I love it because before I joined the military I was from Arizona. The people at Guidance, or should I say, “the family” is awesome.  They have a love and a passion for flying”.

7) What do you like most about your flight training at Guidance Aviation?
“The fact that we get to use our VA benefits to chase our dreams of flight”.

8) What do you think can be done better at Guidance?
“Bring in some Apaches so we can fly them! (smiles)”

9) Would you suggest the professional pilot training program at Yavapai College – Guidance Helicopter Academy to other veterans and others?
“YES, I do it all the time. It’s the best training and environment I think the aviation industry has to offer”. 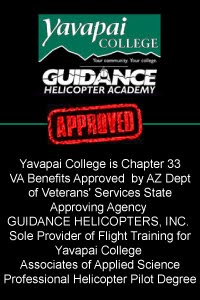